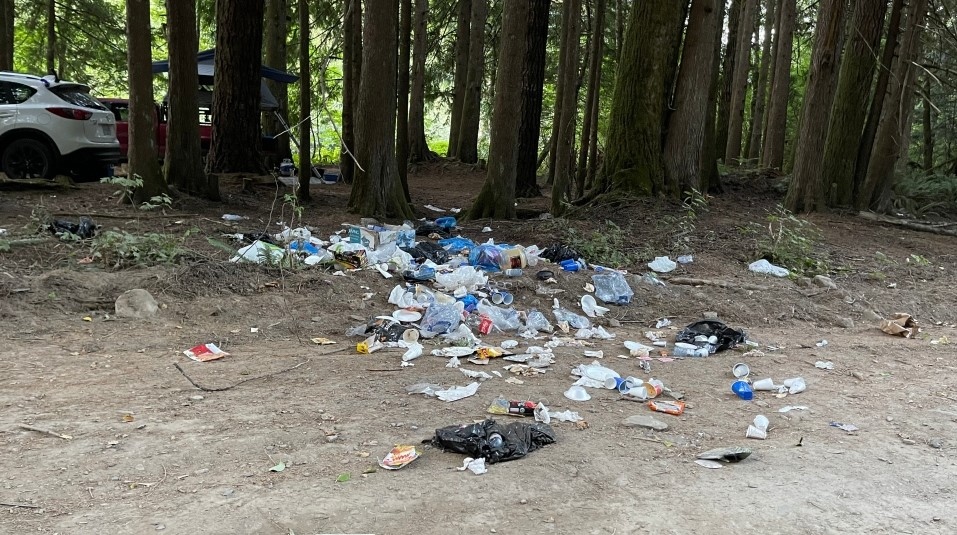 A trash-littered campsite is seen in an image provided by the Four Wheel Drive Association of BC.

DAWSON CREEK -- The Four Wheel Drive Association of B.C. is calling on campers to take their garbage home with them.

This comes as backcountry campsites and roads in the Fraser Valley are being left in what the group calls "disgusting" conditions.

Association member Tracy Waslenchuk says she arrived at a campsite off Chilliwack Lake Road last weekend to an alarming sight.

"It was just coated in garbage when we arrived, bees and mosquitoes everywhere," she told CTV News.

Waslenchuk says it was more than just garbage.

"You actually had Home Depot buckets with pool noodles filled with feces and urine and everything else just left off to the side.”

Waslenchuk tried confronting a group of fellow campers at the site who left their garbage at the side of the road before leaving, but says she was rudely dismissed.

“His response was that they clean it up anyways, and to get a job because I was a loser, basically,” she said.

It’s an issue the association has been dealing with for years. The group conducts several volunteer-driven cleanup efforts throughout the province, but as more and more people are heading outdoors during the pandemic, members say the issue has gotten far worse.

"We see a lot of people that haven't been out in the woods before,” said Matt Ion, head of communications.

Ion says it’s more of an educational issue. “It’s not that they're messy people, but they don't realize that someone is not going to come pickup your garbage."

Ion says if you seen anyone littering you should call the B.C. Conservation Officer Service's RAPP line at 1-877-952-7277.

The service did not respond to a request for comment in time for this story.