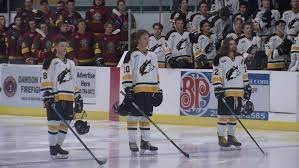 FORT ST. JOHN -- The Fort St. John Huskies won a pair of games over the Thanksgiving long weekend to remain undefeated this season.

The Huskies won their game 3-2 against the North Peace Navigators in Peace River on Saturday.

They were up 1-0 at the end of the second period, then outscored the Navigators 2-1 in the final frame.

The Huskies then travelled to Dawson Creek and beat the Kodiaks 5-4 on Thanksgiving Sunday..

It is the second time this season, the Huskies defeated the Kodiaks by a goal.

The Huskies improved their North West Junior Hockey League record to 6-0 to start the season.

Dawson Creek took on Sexsmith of Saturday night. The Kodiaks were leading the VIpers 6-1 at the end of the second period.

Sexsmith scored 3 goals in the third period, but the Kodiaks held on for the two points, winning the game 6-4.

It was Dawson Creek’s first win this year. Their record to start this season is now 1-5.